Winter is Coming: 6 games unbeaten with Pisa to start term in Serie B

“I’m at home to Entella in six days time, a side that beat Pisa 1-0 in the preseason. There’s six matches to go to the winter break. Six games to pick up a few points, make my presence felt and see how we get on.”

That’s how I finished my introduction to Pisa in part one of this Football Manager journey.

Now, with almost a month off for the winter break, it’s time to assess the opening two months of my stay at Pisa.

Stepping into my new office in November, Pisa were 12 games into the season with three wins to their name and out of the Italian Cup at the hands of SPAL.

The losses weren’t terrible. 1-0 to SPAL, 1-0 to Trapani, 1-0 away to Livorno, but they did stack up and Giuseppe Corrado (the chairman), saw enough in my interview to get me in the door with the promise of improving the dressing room atmosphere and battle against relegation.

The club’s spent the past few seasons in the third tier of Italian football and a sustained spell in Serie B would be just the ticket.

Six games into my tenure and we find ourselves mid table at the turn of the season. Not only that, but we’ve gone six games unbeaten with four wins from the six.

Wins over Entella, Chievo, Spezia and Cosenza have helped things along in the early stages.

To be honest, I wasn’t expecting much from the Entella game to kick off the unbeaten run. Having been beaten by them in pre-season, the lads gave a solid account of themselves. This despite going a goal down 22 seconds into the first half.

Marco Pinato had the game of his life on the left side, running himself ragged, picking up two goals and setting up another before being stretchered off in the 92nd minute.

Fabbro, on loan from Chievo bagged two in two minutes at the death to lay down his marker on his loan season from Chievo.

A 1-1 draw against Cremonese and a scoreless home fixture against Frosinone proved the dull points on an otherwise positive start to proceedings.

Three in a row

The 2-0 win over Chievo was great. 20 shots on goal, half of them on target and two finding the back of the net with Marco Pinto (30) and Francesco Lisi (90+4) stepping up to the mark.

Marco Varnier would bag the only goal of the first half (23) derby against Spezia, having mustered 17 shots on goal before rounding out the calendar year with a 2-1 win over Cosenza on the road. 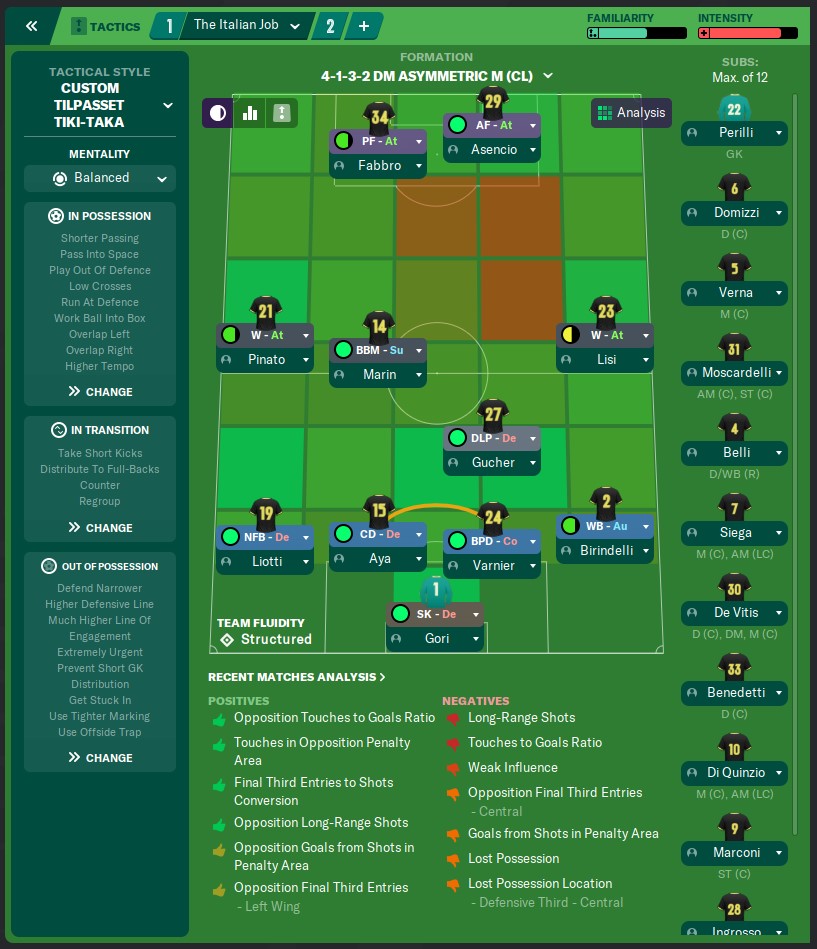 One of the concerns I would have turning into the second half of the season is that Fabbro and Asencio, leading the attack, are both on loan with not much in terms of funding to hold onto them.

They’re not doing too badly at the back but we’re giving up a lot of needless fouls and dropping possession at time where we should be holding fast. Teething problems, but easing as the results start to meet my expectations.

Bar the scoreless draw against Frosinone (though we did finish and hang on with 10 men), we’ve managed to score in the other games, something I’m confident will continue into the new year.

The media had us pegged for 17th; thankfully we’re 8 points clear of there as things stand but it’s all to play for from January to the season’s end.

Next up is a seven game stretch while will allow me some more time to deep dive into the Pisa squad and see what the side are actually made of.

A mid table finish wouldn’t be such a bad things considering the objective is to battle relegation.

The run from mid January to late February sees us lock horns with Venezia (H), Pescara (H) – both in January – then onto Juve Stabis (A), Crotone (H), Trapani (A), Benevento (H) and Empiol (A). Fixtures commence on 18 January, running to 28 February.

Transfer-wise, there’s nothing doing for January on the buying front. I’ve got some coaching spots to fill. I’m about a grand a week over my wage budget, so that needs a little change and at the minute I’ve got about £400k in the bank.

Something will have to give financially or the club is projected to slip to nearly £3m in the red according to end of season projections. But staying up is the target, appearing attractive along the way, being clever with what we’ve got.

Wrapping up part 2, we’re 11th in the table. Super respectable. By the end of February I would be hopeful of creeping inside the top 8. We’re 12 points off the top spot and while mid table safety is my target, I’m always up for a challenge.